Remembering the Battle of the Bulge – DC-3 Society

Remembering the Battle of the Bulge 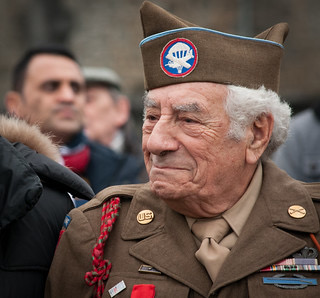 Remembering the Battle of the Bulge

feature veteran and Battle of the Bulge participant, Vincent Sperenza

Commemorating the Anniversary of ending the Battle of the Bulge, January 25 1945

Seventy-seven years ago, a fierce battle was fought in the Ardennes Forest. The battle of the Bulge as it would soon become known was fought within the dense forest and engulfed Belgium and Luxembourg. This glistening, snow covered landscape was now filled with horror and devastation everywhere. Artillery shells came whistling in, gunfire rang out in the distance, troops were spread out everywhere. Oftentimes, due to the number of troops within the closely dense forest prisoners and casualties were being taken on both sides rapidly. The 422nd and 423rd Infantry Regiment of the 106th Infantry Division were encircled and taken prisoner. At first, the situation looked grim, even more so for the troops who did not have proper clothing or equipment. The coldest winter in decades torment these men and little did they know they were on the frontlines of history.

Perhaps one of the highlights of the battle, if there ever is one, would be when General Anthony McAuliffe wrote, “Nuts!” to the Germans who wanted them to surrender. Perhaps it came when reinforcements arrived, when the supplies from the 8th Air Force fell from the sky, or when word spread that the Germans had finally begun their retreat into Germany. Those living today may never truly understand what hardships those who fought in the Battle of the Bulge truly experienced. Today, Private First-Class Vincent Sperenza, age ninety-six, who served in Company H, 501st Parachute Infantry Regiment, of the 101st Airborne Division is one of those soldiers who can still recall the battle with such vivid detail.

Vincent was born in Manhattan, New York in March of 1925. He was four years old when the Great Depression began and only sixteen when the Japanese bombed Pearl Harbor. In the summer of 2021, he recalled his experiences as a soldier during the Battle of the Bulge and the siege of Bastogne.

“Well, I entered the army at age eighteen, 1943, and I was assigned to the infantry school. I became an infantryman with nineteen weeks of basic infantry training, four more weeks of advanced infantry training and two more weeks of weapons training, which in those days were 60-millimeter mortars, bazookas, and machine guns. At any rate, I was ready. I was assigned to an infantry outfit, the 87th Infantry at Fort Jackson, South Carolina, and was ready to go overseas when they would get to it. One day they took us out to a big field, and they said there is going to be a demonstration today. We asked, ‘what kind of demonstration?’ They told us to sit down and while we sat in that field three C-47’s came out of the sky and we saw the doors open, and we saw these men throwing themselves out of the airplane, little white things above them, and they were swinging down to the ground. They rolled up their parachutes, double timed over and stood in front of us. They were great, big, beautiful men with shiny wings, shiny jump boots, and their pants bloused and only paratroopers were allowed to do that. The Lieutenant comes over and says ‘this is the United States Army Parachute Corps, and we are looking for good men. You have to have your nineteen weeks, four weeks, and two weeks of infantry training, who wants to volunteer?’

Those of us who were so ready to get into the fight we kept fretting about the trainee and the trainer. We said, ‘wait a minute!’ and a sobering thought hit us, throw yourself out of an airplane? The Lieutenant said, ‘there is an extra fifty dollars jump pay’ and we all raised our hands! They selected seven of us and we went back to jump school at Fort Benning. We did our five weeks of jump training and went right over into the fight. I was sent overseas in November of 1943 and the situation looked rather bad. Germany had taken over much of Europe and was in Ukraine heading towards Moscow. The Japanese had taken most of Asia and were heading down towards Australia, and we were anxious to get in and do something about it. It looked bad for the United States and all of us. When I got to the 101st they were just coming out of Operation Market Garden which was a disaster. The 101st lost three-thousand men, left a lot of their equipment, and the 101st airborne was supposed to get ninety days of rest, rehabilitation, food, and so on, but it was not to be. Three weeks after they came out of Market Garden, on December 16, a big surprise to everybody, not British intelligence, not American intelligence, but Hitler had saved twenty-five divisions with 18,000 men in each division.

Nine of those divisions were panzers with their newest tanks the Mark 4’s and the Tiger Royals, and fully equipped. It was wintertime and we were supposed to get our winter clothes, but we hadn’t gotten them yet. We went into that battle with summer clothes, jackets, and cotton pants and so on. We were later told that was the worst winter Europe had in twenty years. We were there for the first eight days in Bastogne, the temperature never went above zero. We had no gloves, hats, or winter clothes and it was pretty bad, let’s say uncomfortable.

On the 17th we were woke up in our barracks and told saddle up we’re going up to the front. A lot of us they later told us the figure was ten percent who were unarmed. I was a machine gunner; I was supposed to be armed and we were told we were getting these things back. A lot of men didn’t have helmets, rifles, and when we complained to the Sergeant that this is crazy! The ground is frozen, all of us are going to break our legs. The sergeant said, ‘you’re not jumping, you’re going up in trucks.’ The whole division was put on these big open trucks, for a day and a night, a nightmare ride to Bastogne where the four American divisions were holding the Ardennes line. The 4th Infantry, 28th Infantry, 128th Infantry, and the 9th Armored had been destroyed by the German army. Twenty-five divisions came at them, the Germans slaughtered them. The 128th held on for a while until fortunately while we were able to get there before the Germans hit. What the officers anyway you go to Bastogne and hold it. The Germans are on their way to Antwerp, that was our point of entry where all our food supplies and ammunition came in.

The Germans figured capture Antwerp, split the Canadian and British armies in the North from the American armies in the south, take all the supplies that were meant for them and ultimately change the war. Well, the reason that didn’t happen was that there was 12,000 Americans, 9,000 were paratroopers, 3,000 were from the 705 Tank Destroyers, and a battalion from the 10th Armored Division with seventy-three tanks while the Germans had 1,000. We went into Bastogne and said ‘no, you’re not getting into this town!’ Eight days before Patton finally got there to break a finger, 12,000 Americans held off 56,000 Germans well-equipped with tanks. Their tanks were devastating and yet the Americans held them off. Patton came in on the 26th, formed a circle, we got our wounded out and then we went on the offensive. The rest of the Battle of the Bulge is history, us moving forward, pushing us back to Berlin until May 8, when they surrendered.

The Battle in Bastogne, which most historians will agree was one hell of a battle. You know, I was a machine gunner, you set the machine gun on a wooden block, you hold your own and you’re doing pretty good on holding off the German infantry when four German tanks show up. You wonder what the hell do you do now? And you fire your machine gun in frustration but those tanks coming up, the only thing you can do is dig yourself deeper into your hold. There was no thought of surrender or quit. There was the thought, okay, we’ll let you go by but your infantry is going to get a surprise. The tanks destroy the front lines, the infantry behind the tanks took the area and moved forward. Our General was General McAuliffe who was an artillery commander. Our commander was in the states making speeches, the deputy commander was in England making speeches, the only general with us was McAuliffe. He set up his guns so they not only fired in the permitter but so that they could fire across town to the other side meaning that all of the guns he had could be concentrated in one spot and that’s what saved us.

When the German tanks came up all we do is bury ourselves in our foxhole, but when they went by we stopped the infantry. When the infantry isn’t behind the tanks they could only go back and when they went back the artillery just splattered them. A tank attack against lightly armed paratroopers is usually devastating but not with McAuliffe’s artillery. The Americans found that the Germans attacked at night, early in the day, the Luftwaffe came in and attacked the field hospital, and so on. When their frontal attacks hit us, they figured they’d bomb us into submission. Of course, that didn’t work because this is the 101st Airborne Division!

They expected to go through us like they did the other four divisions, we had a different idea. On January 5, 1945, I got hit. I was taken back to a British hospital because a piece of shrapnel hit my eye and thought it might have hit my brain, so they sent me to England instead. I spent six days in a British hospital, five days for recuperation, for eleven days I was out of it. The outfit, I was with them for the Battle of the Bauhaus Woods and Houffalize.

While I was in the hospital, the outfit moved on to Haggonaut and that is when my buddy Joe I went back to the outfit. From there we fought through Czechoslovakia, Austria, and Bavaria and into Germany. In each case we were like firemen, put on trucks, move out, there are Germans here, take care of them, move out. Of course, we were taking casualties all the way through. In May, we finally got to Berchtesgaden and that was the first town we went into where they were not shooting at us. They put white sheets, pillowcases, out their windows indicating they were surrendering. On May 8, 1945, most of the Division was up in the Eagles nest and that is when we got the news that the Germans surrendered and the war in Europe was over.”

Today, few veterans living who served at the Battle of the Bulge can share their recollections of what occurred during that time. Other surviving paratroopers such as Daniel McBride, Thomas Rice, and Jim “Pee Wee” Martin are others who survived and still actively share their story today. Vincent Sperenza, a young man who was caught up in the uproar of World War II is one of thousands who suffered so that we, along with citizens of France, Belgium, and Germany can live in peace and freedom today. It is up to these men, as well as the upcoming generation of young men and women to carry the torch and share their stories for generations to come.