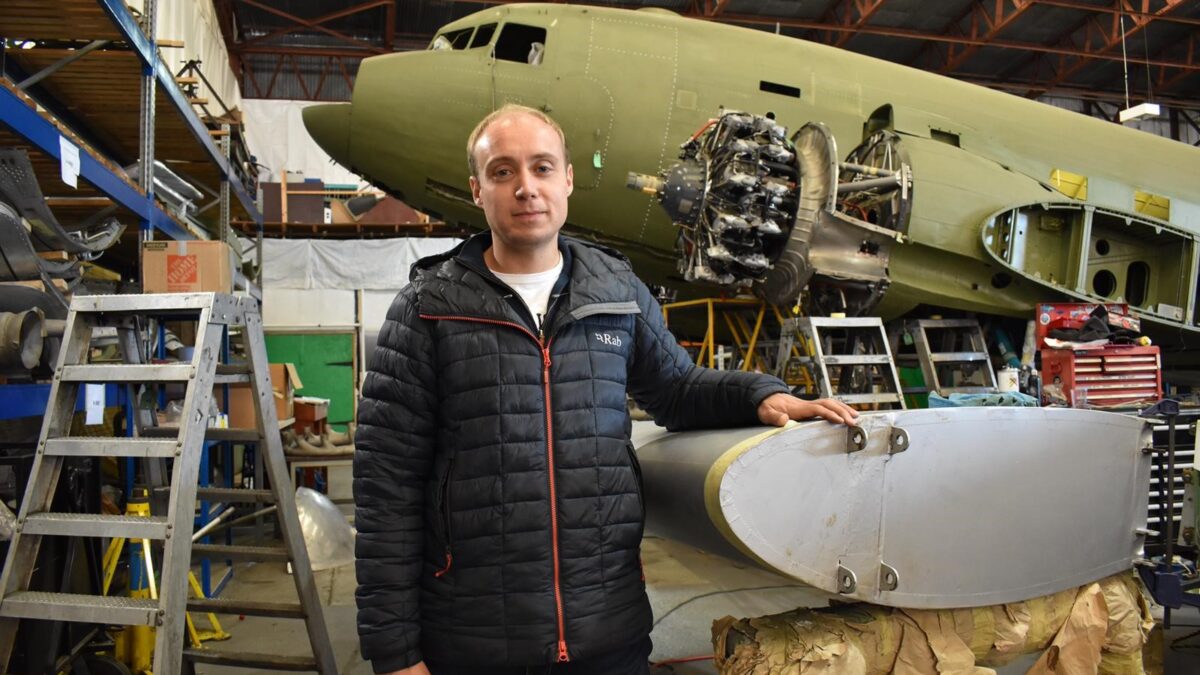 Having purchased a large section of what was Membury Airfield (former USAAF Station 466) for our logistics business in the early 1990s (Walker Logistics Ltd), myself and my Father, Philip Walker were impressed with the wartime history of the old airfield and wanted to somehow honour the location and the men who flew from there.

After much research into the squadrons and aeroplanes that flew from Membury during the war we learnt that it was the 436th Troop Carrier Group and the C-47 aircraft were what was most synonymous with Membury. We decided the best way to honour the history of the airfield and Troop Carrier Commend would be to search for a C-47 that had flown from Membury airfield during the war and bring it back to its wartime home, initially as a static exhibit.

Following an extensive worldwide search with the help of local experts Roger Day and Tom Woodhouse, Night Fright was found in a scrapyard in Arkansas (USA) after failing to sell in an eBay auction and she was eventually purchased in late 2012. After a lengthy dismantling process, Night Fright was shipped back to England in 2017 via Florida where some initial work and the dismantling process took place.

At some point along the line, we decided that it would be cool to have Night Fright as a static exhibit at Membury, but it would be even cooler if she could fly! And so, the project took on a whole new dimension, restoring Night Fright to the finest example of a C-47 flying in the world, in in full 1944 configuration.

The process of restoring her back to flight has begun in earnest with myself project managing the restoration of Night Fright and Heritage Air Services headed up by Ben Cox carrying out the physical engineering. I am a professional pilot, operating corporate jets alongside my role in the Family business. I am also C-47 type rated, having completed a PIC rating with the legendary Frank Moss in Florida a few years ago, I will be one of the pilots who will fly Night Fright once the restoration work is complete.

Night Fright will be a regular participant on the UK and European AirShow circuit taking part in displays, flypasts and round canopy parachute dropping. We are hoping to operate from Membury during the summer months making Night Fright we believe the only warbird in the world to return and operate from her wartime base.

As a project and a team, we are passionate about history and education, Night Fright will be the centrepiece of our tribute to Membury, we are also building a museum, curated by local experts that will be free for the public to come and enjoy and learn about local history.

Alongside this we are also rolling out an education programme where we are giving presentations to local schools, colleges, and museums. Our philosophy is to honour past generations and preserve history to educate future generations.

Through Night Fright myself and Neil are both members of the DC-3 society, I am delighted both personally and from a project point of view to be part of the DC-3 Society Family, the DC-3 community is one best out there in the warbird world and it is a great place to share thoughts with like minded people. Restoring, maintaining, and operating a DC-3 is a huge challenge and a constant battle, having the opportunity to work with other people and organisations striving to achieve the same goal is great, the DC-3 Society brings all that together in one place.

The DC-3 Society are also passionate about history and young historians which is something that is important to us, we look forward to getting involved with this and inspiring young people to take up an interest in WW2 history.