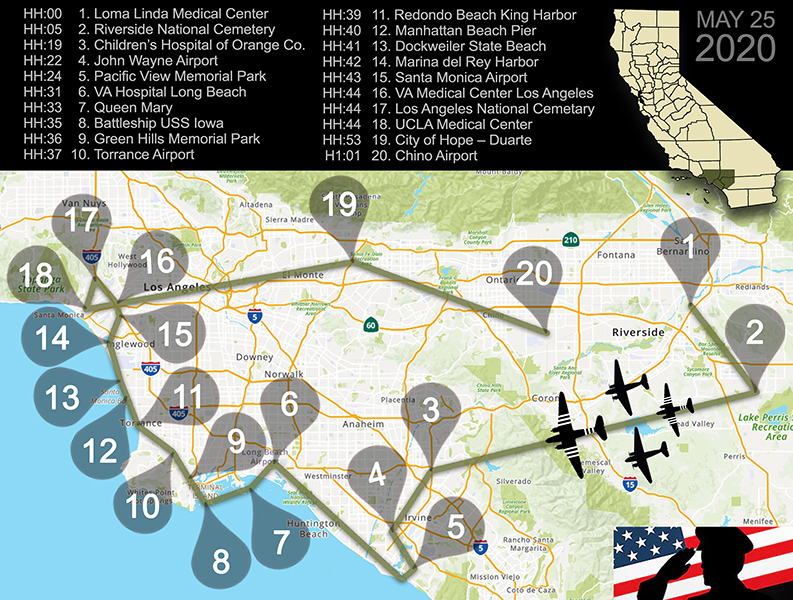 Oxford, Connecticut – May 20, 2020 – Taking a proactive approach to their commemorative operations and flyovers, four members of the D-Day Squadron undergo flight planning and formation preparations this week to bring hope, appreciation and honor with their ‘Operation SoCal Strong’ flyover on Memorial Day, May 25, 2020. This 90-min flyover begins at noon pacific time over Loma Linda Medical Center and ends at Chino Airport. The entire flight path is provided in the accompanying graphic.

No stranger to tight formation and tribute flights, this squadron, a year ago yesterday, launched from Oxford, Connecticut’s KOXC airport for their “Mission to Normandy.”  They successfully crossed the North Atlantic with 15 C-47 and DC-3 aircraft, completing multiple paratrooper drops and a Presidential flyover while participating in events including the 75th anniversary of the Normandy landings, the 70th anniversary of the Berlin Airlift, and commemorations in the U.S., U.K., France, Germany and Italy.

“Our mission flying WWII aircraft over parts of Southern California for Memorial Day is to salute our veterans who sacrificed so much for the freedoms that we enjoy today.  In addition, we will acknowledge the many medical personnel, first responders, and citizens who have provided unwavering support in caring for the local populace during this pandemic,” shared Steve Rose, IEW wing leader, and pilot of D-Day Doll. “To join again with fellow squadron members is an honor and we appreciate everyone volunteering their time and aircraft to participate in this flight.”

Various targets of the flyover include two national cemeteries, VA medical centers, airports, landmark piers and harbors, the Queen Mary and Battleship USS Iowa. Lead aircraft, D-Day Doll, plans to bring on board veterans from WWII, Korea and Vietnam conflicts. “Our goal is to signal to all Southern Californians to remain vigilant during these adverse times as our Greatest Generation have,” added Steve Rose.

“We are glad to see these crews honor our health care workers and to provide a hopeful reminder that America can overcome the current pandemic, just as those that came before us unified to defeat a dangerous enemy,” shared Kevin Riley, executive director of the D-Day Squadron. “Our organization is proud to see the formation procedures honed by these crews in Normandy on display in the United States for the people of Southern California.”

Interviews with these squadron members are available. Charitable and corporate giving opportunities are encouraged to help offset the cost of fuel for each participating aircraft. For media or donation interest, please contact: Lyndse Costabile at lyndse@ddaysquadron.org or 904-404-9192.

The D-Day Squadron is the part of the Tunison Foundation, a non-profit 501(c)(3) charitable organization. It is currently in process of becoming a DC-3 society to promote DC-3 type aircraft airworthiness, serve members and promote static and flying displays for future generations. Its mission will educate and involve the next generation in “flying freedom” and celebrate everything the DC-3 has accomplished in war and peace.

In June 2019, the D-Day Squadron led an American fleet of 15 historic, restored C-47 World War II military aircraft to take part in a flyover of more than 30 international aircraft to drop over 200 paratroopers over the original 1944 drop zones in Normandy commemorating the 75th anniversary of D-Day. The event honored the citizen soldiers of the War, whose bravery led the Allies to the liberation of France, and then to an end of the devastating War in Europe. The Squadron’s education program takes the compelling story of the citizen soldier to audiences at airshows and events off the flight line to honor these brave Americans and ensure their memory and significance is appreciated for generations to come. The group’s efforts are funded through the generous tax-deductible contribution of their supporters. Learn more at DDaySquadron.org. 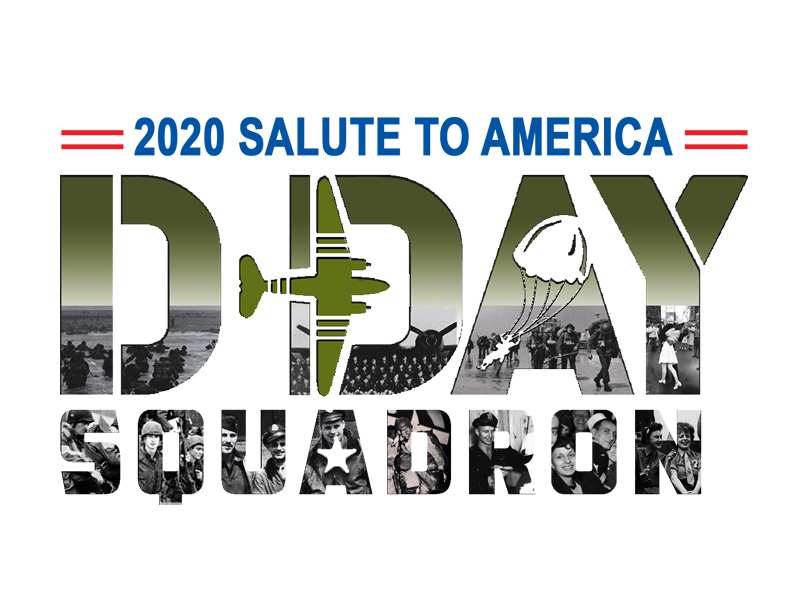 D-Day Squadron Participates in 2020 Salute to America Flyover in Washington, D.C. on July 4 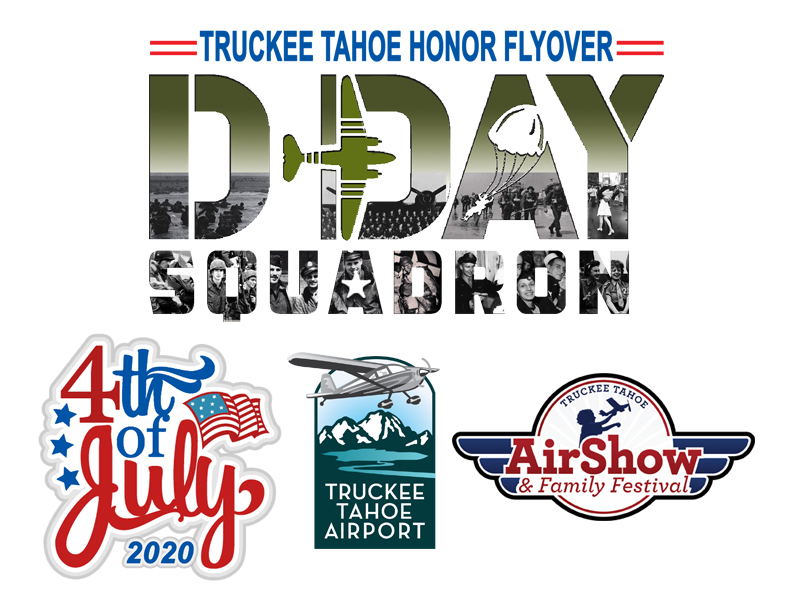 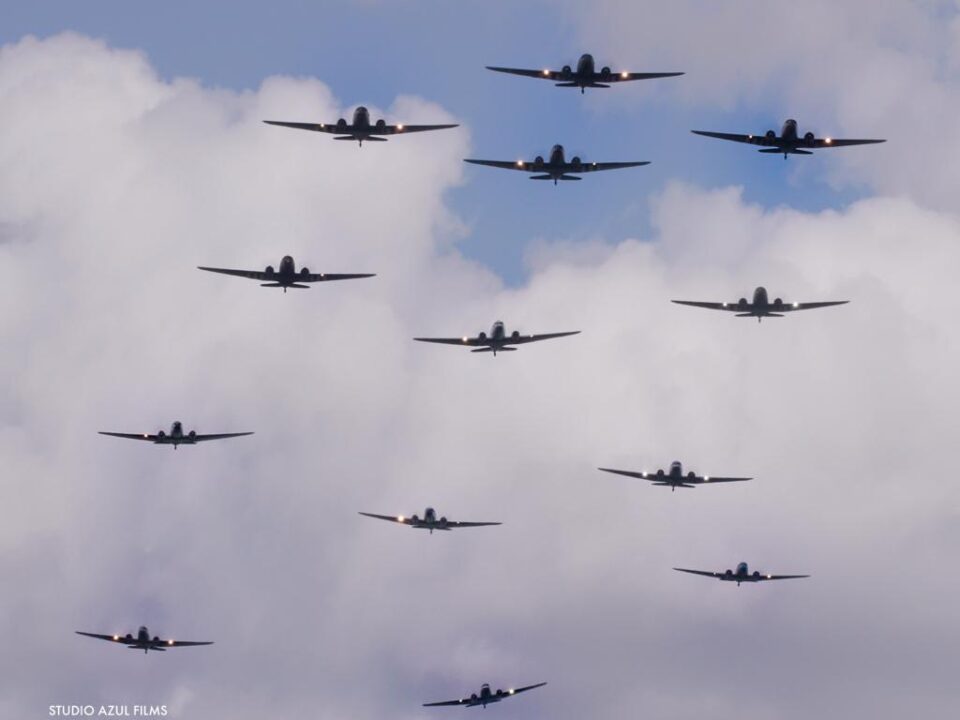